Navigate back to the homepage

Recently we featured Frank’s, well that was his old one.

Since Frank (Randomfrankp) moved, he started working on a new look for his setup, covered in his YouTube series Building My INSANE Gaming Setup!. In this article we will feature the new setup.

Frank showed his love for the new trend of Ikea KARLBY counter-top over 2 Ikea Alex drawers in many occasions in his Room Tour project show, so he did it himself. His new desk is that combo with a little modification, he added desk legs between the Alex units and counter-top to add some height, also that gap makes a perfect place to store some small items, like remote controllers or phone.

This time he’s going full ultra-wide, 3 ultra-wide monitors in 1 over 2 setup, wide screen real estate with an overhead for streaming monitoring, Twitch chat or Twitter. The gap left by the middle monitor is filled by speakers. He mounted two speakers on the wall sandwiching the overhead monitor, great floating effect !

The old setup was white and black, this new one added a wood accent with the counter-top and the wooden omega shaped headphone hanger. White is now stronger with the Alex drawers bellow and a white desk pad, and mainly the new custom PC from iBUYPOWER. 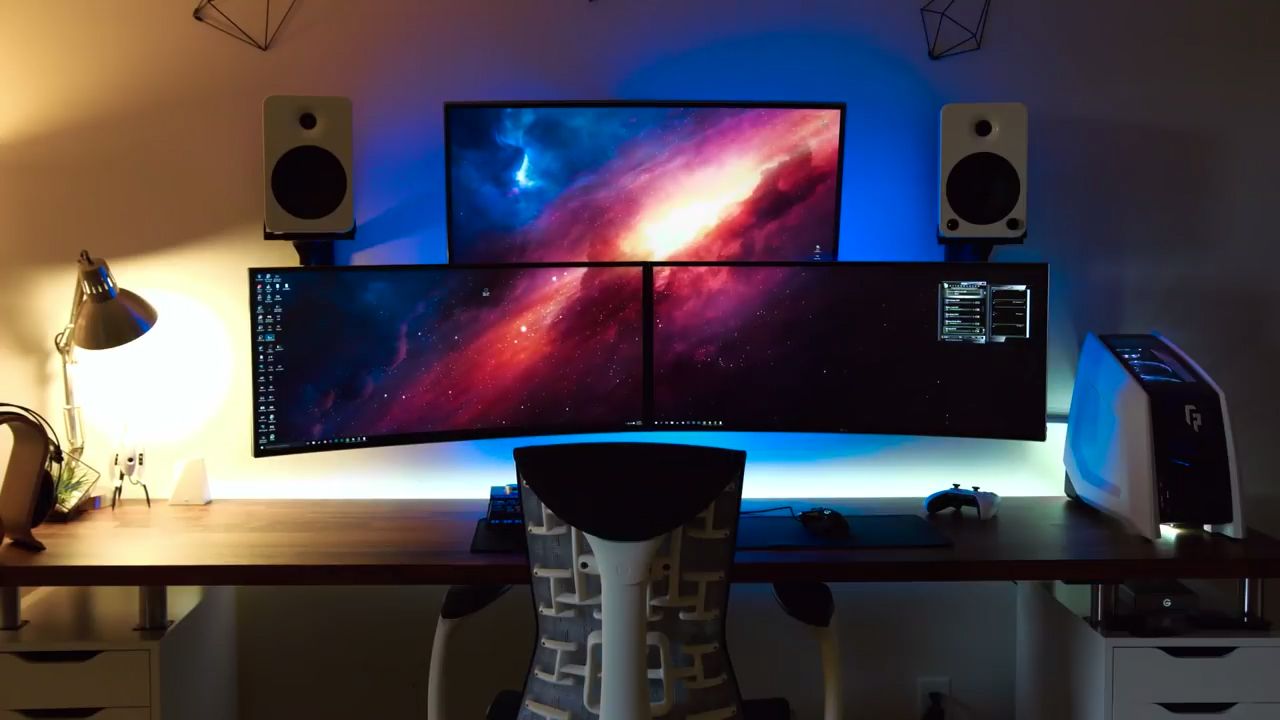 Cable management is on point, he routed the cables behind the PC and monitor inside a white cable channel, really invisible with the white wall. Additionally, keyboard and mouse wires are going through a hole in the desk seamlessly.

What we love about the new setup is the extension of the setup. Sometimes people place a setup in a room where the setup looks an outsider especially with aggressive color palettes. Frank’s setup belongs to the room, it looks like the whole room is the setup, from the white wall with black shapes, the brown carpet reminding us of wood, the setup itself and the Herman Miller Embody chair with black and white in the foreground, awesome.

Fantastic job Frank, you really have a beautiful setup.

Be the first to receive our latest content with the ability to opt-out at anytime. We promise to not spam your inbox or share your email with any third parties.